Making Your Mark on the Web Is Easier than You Think 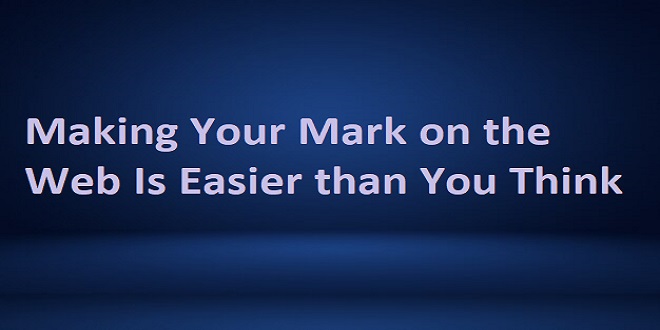 We who work on the Web live in beautiful times. Of course, we did a lot of trial-and-error learning in the past, and the biggest hurdle was getting people to understand what we were on about. But, over time, companies like Google, Yahoo, Skype, Facebook, and Twitter managed to get the geeky Web into the living rooms of regular people and the headlines of the mainstream press.

Now more than ever, there are opportunities on the Web for you to be seen and found as a professional. I am a professional Web spokesperson for a large company, and I spoke at 27 conferences in 14 countries last year. I write for several magazines and blogs and have published a few books. When people ask me how I got to where I am now, my standard answer is: by releasing stuff on the Web and listening and reacting to feedback. And you can do the same.

You can quickly share thoughts, finds, photos, anything on a blog. Not every blog has to be a Web expert’s refined and inspiring output. In the same way, a blog should not become an endless stream of boring anecdotes (like sharing the joys of having bought a new doormat this morning). My blog, wait-till-i.com, has always been a personal scratchpad, if nothing else. If I code something that has always annoyed me in a new way, I’ll write a quick post. If I find someone else who has written something cool, I do the same and comment on it.

Unconferences (including BarCamp and others like it) are beautiful forums for practicing public speaking. The cool thing about BarCamps is that everyone who goes has to give a presentation, host a discussion round, or do something similar — it won’t just be you up there.

Attend and Speak at Conferences

Attend conferences whenever you can. They are priceless opportunities to network and to get to know people who you read about “in the flesh.” It’s a great feeling to ask a question of someone you’ve learned from and respect, and it shows them their work is appreciated

Don’t get bogged down taking notes; that’s the organizers’ job. Instead, chat a lot, give out cards, or — even better — swap Twitter handles. Go with the flow of the conference; if it’s time for beer, then it’s time for beer and chatter, not time to discuss highly technical matters.

If you want to crack a particular problem but you’re not sure exactly how to do it, put it out as a question. A designer and a developer working together on a demo product or article are always better than a single person trying to do everything (and feeling out of their element). Duos can be highly successful, and even if the team is formed just for a one-off, collaboration lets you deliver products while getting to know the working styles of others.

Another helpful way to collaborate is to form working groups. The WaSP task forces, for example, work that way and have been immensely successful. Other developers come together under local banners, bringing collective fame to all involved. The UK-based Printpack is an example of that, as are the Multipack or the Webkrauts in Germany.

Build on the Work of Others

The wonderful thing about Web development these days is that you can quickly build on what other people have done. So much hard work gets released as source code or Creative Commons content.

Instead of writing your solutions to solve problems that other people have nearly solved, extend their work to do the one thing missing on your terms. Why not develop someone else’s ideas and localize them to your market? Of course, this could entail translating and changing some features (removing those that don’t apply and adding those that are needed), but it’s probably worth it. For example, when the Yahoo User Interface Library team created its fonts.css file, it found 12px Arial to be a tremendous readable baseline for Web typography.

These are just a few ideas you can use to get yourself noticed on the Web. Most are free or relatively inexpensive, so before you spend a lot of money on a social media expert or SEO consultant, have a go on your own. Before you know it, you’ll find yourself enjoying being a known Web citizen.

Previous articleChecking for Mail
Next articleWhat Font Should I Use? 5 Principles for Choosing Typefaces

Why SMPO Is The Right Place For Selecting Disposable Vapes