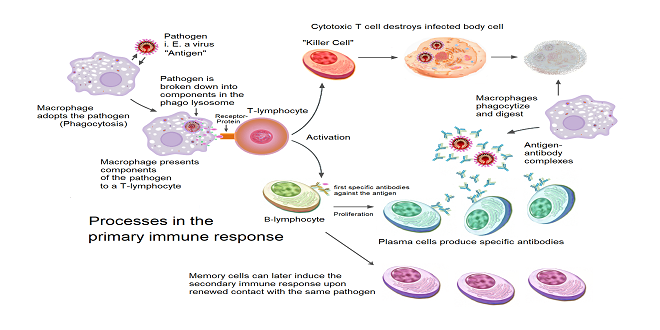 Many immune effector cells circulate in the blood as the white blood cells. In addition, the blood is the conduit for the precursor cells that eventually develop into the immune cells of the tissues. The circulating immunologic cells include granulocytes (polymorph nuclear leukocytes, PMNs), comprising neutrophils, eosinophils, basophils; lymphocytes; and mine diseases or in settings where normal cells are harmed as innocent bystanders when the immune system mounts an inflammatory response to an invader. It is beyond the scope of this volume to provide a complete treatment of all aspects of modern immunology.

All granulocytes have cytoplasmic granules that contain biologically active substances involved in inflammatory and allergic reactions.

The average half-life of neutrophils in circulation is 6 hours. To maintain the intermediate circulating blood level, it is necessary to produce over 100 billion neutrophils per day. Many neutrophils enter the tissues, mainly if triggered by an infection or by inflammatory cytokines. They are attracted to the endothelial surface by cell adhesion molecules known as selections, and they roll along with it.

Mast cells are heavily granulated cells of the connective tissue abundant in tissues that come into contact with the external environment, such as beneath epithelial surfaces. Their granules contain proteoglycans, histamine, and many proteases. Like basophils, they degranulate when allergens bind to IgE molecules directed against them that previously coat the mast cell surface. They are involved in inflammatory responses initiated by immunoglobulin IgE and IgG (see below). The inflammation combats invading parasites.

The production of white blood cells is regulated with great precision in healthy individuals, and the production of granulocytes is rapidly and dramatically increased in infections. The proliferation and self-renewal of hematopoietic stem cells (HSCs) depend on stem cell factors (SCF). Other factors specify particular lineages. The expansion and maturation of the cells that enter the blood from the marrow are regulated by glycoprotein growth factors or hormones that cause cells in one or more of the committed cell lines to increase and mature.

Insects and other invertebrates have only innate immunity. This system is triggered by receptors that bind sequences of sugars, fats, or amino acids in common bacteria and activate various defense mechanisms. The receptors are coded in the germline, and their fundamental structure is not modified by exposure to antigen. The activated defenses include, in various species, the release of interferons, phagocytosis, production of antibacterial peptides, activation of the complement system, and several proteolytic cascades. Even plants release antibacterial peptides in response to infection. In invertebrates, innate immunity is also present but complemented by adaptive or acquired immunity, which is a system in which particular antigens activate T and B lymphocytes. In both innate and acquired immunity, the receptors involved recognize the shape of antigens, not their specific chemical composition.

Immune and inflammatory responses are mediated by several different cell types granulocytes, lymphocytes, monocytes, mast cells, tissue macrophages, and antigen-presenting cells that arise predominantly from the bone marrow and may circulate or reside in connective tissues.

Spiritual Healing & Divine Light Guidance: How Does It Work?