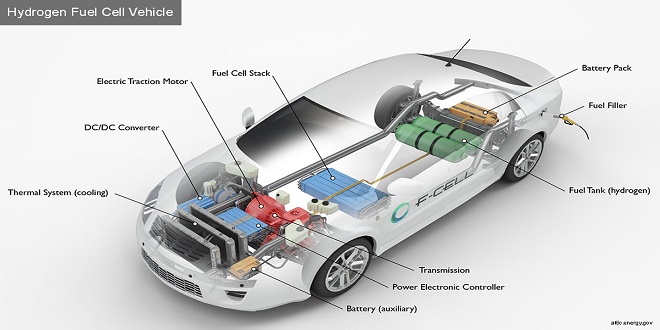 Although hydrogen is the element found in the greatest quantities in the universe, it doesn’t exist in a purely natural state on earth as fossil fuels do. It is attractive as a fuel because, by a process called electrolysis, it can theoretically be derived from water, the air, and many other substances.

Of course, until ways can be found to fill a vehicle’s tank with water and have it produce its own hydrogen, there’s still the problem of the fossil-fuel energy necessary to produce hydrogen in large quantities and deliver it to a vehicle as a liquid or gas.

And because hydrogen is highly flammable and very cold in its liquid form (minus 453°F!), there are safety concerns about shipping it, pumping it into a vehicle’s fuel tank, and storing it there under extreme pressure.

A fuel cell creates electrical current from hydrogen and oxygen and may well be the best use of hydrogen as an alternative to fossil-fueled vehicles. When used in a hydrogen-powered EV called a fuel cell vehicle (FCV), virtually the only tailpipe emissions that hydrogen produces are water molecules.

Although there are many types of fuel cells, the ones using a polymer exchange membrane are the most popular for vehicles because they produce more power and operate at lower temperatures, which enables them to warm up faster than other, hotter, types of fuel cells. The resulting current is fed directly to the vehicle’s electric motor.

As you can see in  a fuel cell has a positive anode and a negative cathode. Hydrogen gas enters the cell and is sent to the anode, while oxygen in the form of air flows to the cathode. A thin plate of platinum particles serves as a catalyst to split each atom of hydrogen into positive and negative ions.

The polymer electrolyte membrane lets the positive ions go through it to the anode. The negative ions can’t get through and have to take another route to the cathode — on the way they create electrical current to drive the electric motor of the vehicle.

When the positive and negative hydrogen ions are reunited at the cathode, they combine with the oxygen from the air into H2O and leave the cell as water vapor. On vehicles, hundreds of individual fuel cells are linked together into fuel cell stacks to increase the electrical output.

Whether or not they become widely available depends on whether cheaper and more efficient alternative vehicles eliminate the need for them.

The biggest differences between gasoline vehicles and NGVs are as follows  Because CNG is compressed, it requires fuel tanks that can withstand such pressure. (The fuel is measured in units called gasoline-gallon equivalents, or GGE.)

Fuel lines on NGVs also have to be high-pressure lines, and the fuel injection delivery system has to be specially made for CNG. But after the gas is mixed with air and injected into the engine’s combustion chamber, the engine works the same as a gasoline ICE. A significant difference occurs at the tailpipe, however. CNG produces far fewer pollutants than either gasoline or diesel, which means that most NGVs meet low-to ultra.

I hope that you will be so turned on by the amazing advances in automotive technology that you will trade your less-efficient set of wheels as soon as you can for a vehicle that will get you there at less cost to you and to the environment. Until then, please see for tips on driving and maintaining your increased fuel efficiency. This is something that you can do right now to — literally — “save the world!

How POS Terminal Machine Can Improve Your Business

Smoothing the Ride: Steering and Suspension, Tires and Transmissions