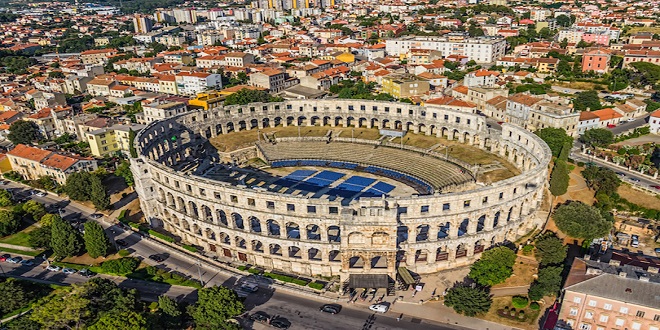 It is generally acknowledged that the Colosseum is one of the most extraordinary engineering feats of the Romans – it was undoubtedly the largest amphitheater they ever built. Standing inside, seeing the tunnels where wild animals would be prodded into deadly games, and climbing the steep tiers of the Arena, it is easy to imagine an enormous crowd – shielded by awnings from the heat of the day – roaring with excitement and disapproval. Visiting the Arena in Pula will evoke much the same feeling, except that the space is more intimate here. The chances are that you may well be among a more orderly crowd here, listening to music or watching opera or dance because, unlike the Colosseum, Croatia’s best-preserved classical monument remains a place of entertainment.

American composer Cole Porter said it all when he said, “You’re the top! You’re the Colosseum.” Tourists have been raving about the Colosseum since the 18th-century Grand Tour of Europe, popularizing the English elite. Even as a partial ruin, it can still take your breath away.

Italy’s most-visited sight is often crowded and usually has long lines. The entire building is a traffic roundabout, and the interior is too precious to host concerts. Your visit will be even more memorable if you fall victim to a pickpocket.

The Colosseum is an extraordinary achievement. It’s best to visit early in the morning or late in the afternoon when it’s less crowded. For a good overview, climb to the gallery tier. To avoid lines for tickets, go to the Palatine first – a ticket there covers both sights, so afterward you can walk straight in.

Getting There and Around

Pula has an international airport 4 miles (6 km) from the city center. The city is not significant, and buses are efficient means of transportation. Taxis are available and inexpensive. There is a regular boat from Venice in summer.

Most accommodations are on the Verudela Peninsula, Pula’s playground to the city’s south. A short walk from the Arena is the small Scaletta Hotel. The Hotel Riviera is also close by.

Being a tourist center, Pula is more crowded in summer. However, warm weather makes it pleasant during Mar-Oct. Check-in advance for details about the events held in the Arena.

Budget per Day for Two

US$175, including a visit to the Arena, food, and accommodations.

The Arena is the Latin word for sand, which covered the central area – it helped soak up the blood. Built at the same time as the Colosseum in the 1st century AD, Pula’s Arena is the sixth-largest of the 200 or so theaters that the Romans erected in their centers of power. A particular feature of this theater is the gutter running around the top of its walls that collected rainwater in tanks in four still-standing towers. The perfume was added to the water, then sprayed over what must have sometimes been a less-than fragrant audience. Of a similar elliptical design to the Colosseum, but one tier shorter and lacking its heavy grandeur, Pula Arena has a much more accessible, friendlier appeal. Its original banks of seats have long since been removed – some taken to Venice to build palazzi – but a newer semi-circle of chairs rises to grassy banks. As you wander around, the audio-tour clamped to your ears, the centuries slip away, and you’re transported back in time. Still, you only become fully aware that this was once an extremely violent place when you reach the dark cells beneath, where martyrs and animals were confined until their final performance.

Previous articleAgrigento and Selinunte, Sicily vs. the Acropolis, Athens
Next articleExporting Your Mail and How to Back Up or Export Your Email of Massive Text File

Agrigento and Selinunte, Sicily vs. the Acropolis, Athens